Mariagiri stands as the unification of different region since its origin

Mariagiri EMHSS has a long tradition of service, progress and a long history of providing executive education over last 50 years. Mariagiri is situated at the core of Peermade in the midst of hills surrounded by calm and real natural beauty with spiritual atmosphere. The calm atmosphere of the school compound awakes the creativity and study mentality in the students. 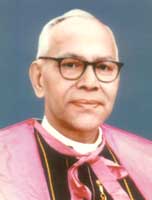 The bishop of Kottayam diocese His Grace Mar Thomas Tharayil took initiative to start a school in Peermedu with a vision to promote economic, social and cultural growth of Peermade by providing an outstanding and holistic education to the rural people of Peermade. The vision came into being from 1st June 1966 and was implemented under the name Mariagiri English Medium School. Thus the first English medium residential school was established in Peermade with 16 students in 8th standard as the educational shadow to the all people of Peermade without any discrimination. Mariagiri stands as the unification of different region since its origin.

Rev Fr. Thomas Choolaprambil was the first Head Master of this school. He took much more efforts to set this school in this remote area at that time. The effort done by Rev Fr. Thomas Choolaprambil was quite praiseworthy. Even though the school faced many crisis during the initial stage, maximum effort and restless work helped to grab 100% result in the first SSLC batch of the academic year 1968-1969 under the administration of Rev. Fr. Joseph Manappally. This become an inspiring spirit of achieving the present glory.

At initial stage the school acted as boys school and then as a girls school and later co-education was started which continues still now. At starting the teachers and students resided under the same roof and the school was like a complete ‘gurukulam’.

Due to financial crisis the school was about to close but the restless commitment and tireless hardwork rejuvenated the smooth running of school.. During that period  Sr. Doyle, Sr. Hilaria and Sr. Pakomia from visitation congregation served here for next few years with much dedication without considering the difficulties. Sr. Doyle served Mariagiri for 22 long years. Her commitment, hard work and effort laid the corner stone for the step by step growth of the school and its invaluable. Rev. Fr. Lukas Pathiyil came with an idea to start UP section. His strong desire and continuous effort become fruitful in June 1976. During this period boys boarding and an auditorium was constructed. Rev. Fr. Thomas Vattothuparambil guided the school for 13 years. Under his guidance the flag of Mariagiri reached higher and higher and achieved glorious record in academics, discipline and extra-curricular. And step by step the construction work also reached to its height stadium, waiting shed, new class rooms, basket ball court etc was constructed.

The Arch Bishop His Excellency Mar Mathew Moolakkatt also served the school as boarding Rector and teacher  for 3 years and as HM for 2 year. His love and care for the school is still boundless.

We at Mariagiri are proud of the fact that the school has been achieving 100% result in SSLC since 1976.