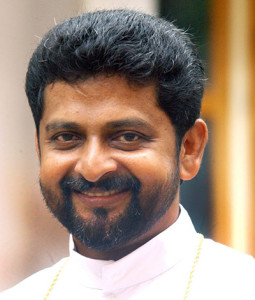 He was born on April 18, 1961 at Ettumanoor, Kottayam. He completed his philosophical and theological studies at St. Joseph’s Pontifical Seminary, Mangalore and was ordained a priest on December 28, 1987. He studied Canon Law at Santa Croce University in Rome and took Licentiate Degree in 1995.

Mar Pandarasseril has a wide parish and administrative experience. He served Chakkupallam, Kattappana, Karimkunnam and Edacat parishes. He was also the Rector of the Diocesan Minor Seminary from 1996-99. He served as Additional Chancellor, Eparchial Judge, Eparchial Consulter, Secretary to the Corporate Educational Agency and Syncellus of the Malabar Region. Syro Malabar Synod has chosen him as the Auxiliary bishop of the Archdiocese of Kottayam and the Holy Father Pope Benedict XVI assigned him the titular Episcopal See of “Castello di Ripa” on September 21, 2006. He was consecrated bishop on October 28, 2006 at Christ the King Cathedral, Kottayam by Mar Kuriakose Kunnacherry, assisted by Major Archbishop Baselios Mar Cleemis and Mar Mathew Moolakkatt. He is the Member of Synodal Commission for Catechism and Commission for Laity, Chairman of the K.C.B.C. Commission for Youth.